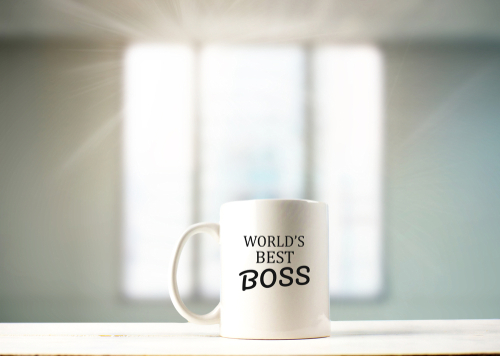 Ambiguity: a state of being vague and unclear.

The Coronavirus Pandemic has forced businesses to confront a world of unprecedented ambiguity. When will things to return to normal? And what will ‘normal’ look like? Before the onset of the pandemic, business leaders faced a world that was already steeped in ambiguity. Now, however, that sense of uncertainty has amplified to almost unimagined levels. We are in uncharted territory.

Studies show that a whopping 68% of the workforce in the U.S. is disengaged at work, and the leading reason for this is that employees have issues with the boss. “People don’t leave their job; they leave their boss,” has become a popular refrain in corporate America. What is at the root of all this discord? This was already an important question before the pandemic hit. But in this new world, it is absolutely imperative that we find answers.

Let’s take a look at the Strivership Matrix and discuss what the attributes that people are really looking for in a boss. 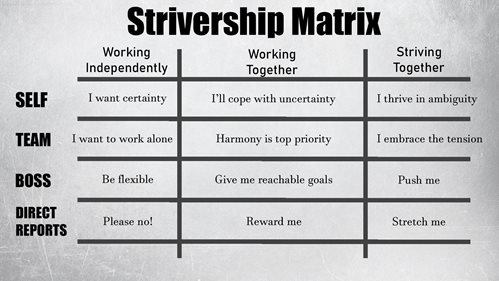 People who prefer to Work Independently don’t want to have a boss in the first place. They do not like other people weighing in on what they do or they when to do it. They are most content in their comfort zone, working alone, on their own schedule. If they have to have bosses they want them to be flexible.

Most people, however, struggle with bosses who want them to simply Work Together. These bosses ascribe to a collaborative model of work designed for the Industrial Age, when efficiency was the key to success. Their mantra is, “co-labor to attain a reachable goal, rinse and repeat.”

This type of boss wants all ideas to flow in one direction – from the top. They make their people feel like they can’t offer new ideas unless they affirm them. As an employee with such a boss, you always have your guard up. If you have a personal issue with them, you’ll put off communicating with them about it. That’s because this type of boss has to be in control of setting all goals and everything that goes into achieving them. Some people do very well in this environment, at least in the short term, because the boss entices them to comply cheerfully through rewards systems. But a focus on rewards creates an addiction to results, and the incessant benchmarking that fuels this addiction takes its toll. Eventually, they hit a wall and either become disengaged (sometimes actively so), or leave.

Although many may not be able to articulate it, people are looking for bosses who will Strive Together with them. They want to work for bosses who know what they don’t know, and who expect their direct reports to challenge them with new ideas. These types of bosses create an environment of complete transparency. People do not hesitate to communicate with them when a personal issue arises.

When we think of the type of boss people are looking in times of crisis, an oft-cited modern example is John F. Kennedy, who led us through the Cuban Missile Crisis. In the New York Times, Jon Meacham recounts Robert F. Kennedy’s appraisal of his brother’s leadership:

“President Kennedy,’ Robert F. Kennedy wrote, ‘wanted people who raised questions, who criticized, on whose judgement he could rely, who presented an intelligent point of view, regardless of their rank or viewpoint.’ And, when it was time to go public, the president trusted the people. There was no happy talk, no mixed messages, no self-pity.”

“Let no one doubt that this is a dangerous effort on which we have set out. No one can foresee precisely what course it will take or what costs or casualties will be incurred. Many months of sacrifice and self-discipline lie ahead.”

That Kennedy’s quote could so perfectly fit our crisis today emphasizes that as much as the world has changed, the principals of leadership have not. During uncertain times people are searching for bosses who understand that thriving in ambiguity requires all hands on deck.

Next time: We will discuss what it means to strive together in your Relationship to Direct Reports. Leadership Development has become a multi-billion dollar industry. Where is the ROI?  View Jeff’s entire series here.

Revenue Recovery: An Element of a Sound Royalty or Commission Based Revenue Program

As we all know, the licensing and revenue sharing business is a significant part of…