Okay, so maybe I did tear up a bit – What dad wouldn’t? When I watched my oldest son, Lance, being inducted into the Regis University Sports Hall of Fame this past fall, my emotions were all over the place – including those hard-to-conceal tears. 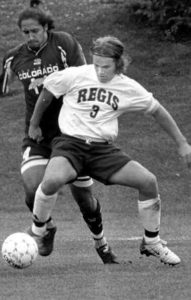 Allow me to brag… Like many boys his age, Lance joined a pee-wee soccer team when he was just three years old. It was clear from the beginning – as he raced around the field often ahead of the pack – that he had a special gift. Soccer quickly became Lance’s passion.

When he outgrew his recreational team, Lance played youth premier soccer with the Udinese and Avalino clubs here in Kansas City. At Rockhurst High School, he was an outside midfielder on two Missouri State Championship teams in 1998 and 1999. He was recruiting by several collegiate programs – including Denver, Creighton, Tulsa, Bradley and several local universities – but, he decided on Regis University in Denver, where he started all four years under Coach Matt McDowell.

My coaches knew how to bring out the best in me and in turn, I believed in me.

Lance Snodgrass is one of the all-time greats of the men’s soccer program and was one of the first players to truly leave a mark on the program. Snodgrass graduated from Regis in 2004 after a four-year playing career. Snodgrass started in a program-best 75 games netting 44 goals, assisting on 30 and tallying 118 points. He remains the all-time leader in career assists, while ranking second in points and third in goals. In his final two seasons as a Ranger, Snodgrass combined for 32 goals and 20 assists. His 17-goal mark in 2002 ranks tied for first for most goals in a season. Snodgrass sits atop 12 statistical seasonal categories, the most of any other player in Ranger history.

After earning his bachelor’s degree in accounting, Lance stayed at Regis to complete his master’s degree in business administration. During that time, he served as an assistant coach for the Regis men’s soccer team and later became an assistant coach for the nearby Broomfield High (Colorado) School boys’ soccer team in 2005 and 2006 – helping to lead the team to the state title game both years (they won the title in 2006!)

Today, Lance, his wife, Rebecca, live in Kansas City with my two beautiful and athletic grandkids. He works as a senior tax consultant for 20/20 Tax Resolution. He also coaches a girls’ under-14 premier soccer team.